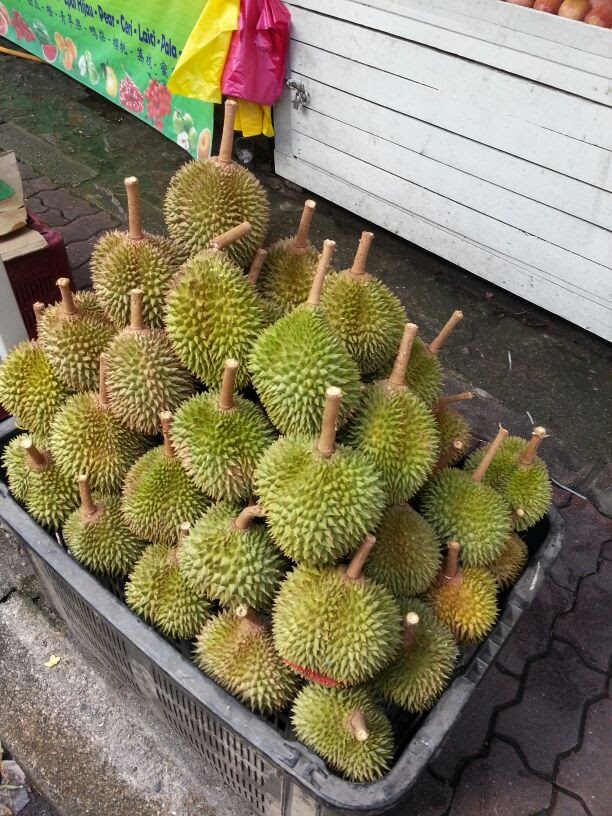 Durian have many unique in variety and roust in taste like durian kampung, Udang Merah, Horlor, Black Thorn and Musang King. Musang King Durian is highly popular in the world.
Udang Merah is usually brown and moss green in colour, while Musang King has a lighter green colour. Black Thorn sports a star shape at the bottom and bits of black spots

The "branded” durians such as Musang King, Or Chi (Black Thorn) or D24 are too expensive. But the "normal general" like durian Kampung is still sweet, Juicy, Succulent.
A durian of any variety usually tastes sweet, bitter or fermented (often described as alcohol-like). Some might taste sweet like white chocolate, caramel or even burnt sugar. durian from trees of 30 years old and above had superior qualities taste.

In year 2019, the seasonal price for durian kampung ranges between RM8 and RM10 per kg, compared with Musang King which is priced at RM40 per kg.

Most of the plantation is in Pahang state, Penang and Johor. Compare the durians in Vietnam, Indonesia, Thailand, Singapore and Malaysia. The best durians are the ones in Malaysia.

Year 2018, Malaysia's total durian export to China was valued at RM9.44mil in 235.62 tonnes, less then 1% of the Chines population have tasted Musang King. Malaysia is aiming to export about 8,000 tonnes of durian annually valued at around USD 99mil via chartered flights at Sepang. Cryogenic Freezing (Durian Whole fruits for China Export)

China approves import of frozen durian from Malaysia and China currently imports around 300,000 metric tons of durian each year, mainly from Thailand, he adds. China’s General Administration of Customs has approved imports of frozen whole durian fruit starting May 30,2019  following an agreement signed in August, 2019